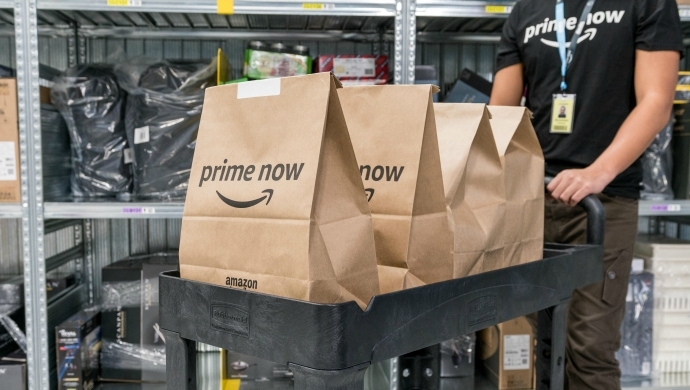 The retail giant is having trouble gaining market share with analysts pointing to its failure to offer a full click-and-mortar experience.

Online e-commerce giant Amazon appears to be struggling in its bid to capture Singapore’s retail market after failing to chip away at the dominance held by brick-and-mortar retailers with its entry into the lion city last July. Channel checks by Singapore Business Review reveal that online ordering of groceries accounts for just under 2% of the retail pie in the city-state, and that Amazon only has a measly share of that.

In addition to reports of delivery delays marring its Asia Pacific debut, the tech giant is faced with considerable resistance from residents with a preference for physical grocery locations.

“Singapore’s online grocery delivery market is still much smaller than other markets as there is little need to order online for convenience,” said RHB analyst Juliana Cai.

Part of the reason Amazon is failing to gain momentum, despite expectations that it will take Singapore’s retail scene by storm, is that most residents still live within easy walking distance of a grocery store and a mall and won’t be easily lured away by enhanced product offers on its Prime Now same-day delivery service.

Online grocery accounts for only 1.2% of Singapore’s total grocery market in 2016, according to the Institute of Grocery Distribution.

Amazon is therefore faced with a monumental challenge ahead as it must chip away not just as the dominance of brick-and-mortar retailers who wield large influence over Singaporean consumer preference but must also contend with established online retailers like RedMart who entered the market in 2011, Sheng Siong who launched an online grocery in 2013 and a series of innovative, smaller startups like honestbee aiming to grab a slice of the profitable retail pie.

Most residents also purchase their day-to-day food needs in physical stores whilst online groceries can only hope to lure Singaporeans with the little Singaporeans have left to buy in non-perishables, according to Simon-Kucher & Partners director Thibault Ricbourg.

Also read: Are supermarkets kicking convenience stores out of Singapore?

The e-commerce market, whose estimated value is projected to hit US$7.4b by 2020, is also inherently limited by Singapore’s small population as there is not much room left to penetrate as most sellers have captured most, if not all, areas of mass market retail from food to lifestyle to fashion.

This means that Singapore is projected to have a lower spending population compared to Taiwan, Indonesia and other larger countries.

Oliver Wilkinson, Strategy Partner at PwC Singapore, echoed the sentiment, “Grocery retail has been tough to execute globally as challenges with logistics and high customer expectations have dampened property. But we do expect the share of online grocery to continue rising.”

Click-and-mortar is the future
Amazon’s main weakness lies in its purely online base, analysts note, as consumers are increasingly leaning towards a full shopping experience that combines the best of both brick-and-mortar and e-commerce or what has been touted as ‘click-and-mortar’.

“Local retailers realise they need to invest to transform themselves in the face of disruption to their business model,” said Joshi from EY.

Retailers should therefore aspire towards a frictionless omnichannel approach that integrates the necessary mobile, online and offline channels for a seamless shopping journey experience, something that CapitaLand aspired to achieve in its partnership with Alibaba last year to launch click-and collect lounges and online fashion marketplace ZALORA who launched digital pop-up store in ION Orchard.

“To further support its growth, Amazon could put in place a “click-and-mortar” concept through pick-up points at transport hubs like MRT stations or through local convenience stores,” said Ricbourg, adding that a collaboration with food delivery companies like Deliveroo may be useful to contest Redmart’s dominance in the online grocery scene who has linked up its membership programme with UberEats last April.

However, it’s not just Amazon that needs to reevaluate its strategy. Brick-and-mortar retailers should also step up their digital game unless they want to find themselves taken over by shops that are able to provide a more comprehensive shopping experience.

“On the e-commerce side, there is now much more intense competition with the entry of large global players, and the growth rates, while still high, have moderated slightly. This puts pressure on smaller, niche players and some consolidation moves in this space are a possibility,” said Joshi, with Wilkinson noting that the impact has been largely concentrated on prime retail locations like Orchard Road which has been badly hit by a drop in tourist retail spend.

Prime retail rents in the city-state are expected to remain flat at $35 psf monthly as leasing demand is tempered by structural challenges from e-retailers who are increasingly looking to Singapore for expansion.

Amazon is amongst the list of companies leveraging on the lion city as a strategic gateway to tap into Asia Pacific’s vast retail market. Major e-commerce player Alibaba also raised its stake in Singpost from 10.2% to 14.4% whilst a series of Japanese companies like Don Quijote and LUMINE are establishing Singaporean headquarters to eventually expand their regional footprint.

And this comes as no surprise. From a certain standpoint, Singapore has all the right ingredients and prime business conditions that can fast-track the operations and expansion of e-commerce companies: internet rates that are amongst the world's fastest and a growing middle class population with large purchasing power. The lion city’s mature transport and delivery network also make it the one of the ideal locations for a company like Amazon to set up shop and eventually scale.

“More importantly, considering the importance of logistics for Amazon and the fact that it requires a robust logistics network to be able to achieve its Amazon Prime Now delivery rate of two hours, is the country's Operational Risk score for Singapore's Transport Network, which we evaluate to be at 81.6 out of 100, placing it first regionally,” according to BMI Research.

This comes amidst estimates that online sales will pick up in the coming years to snap 4% share of Singapore’s grocery market by 2020, according to Shirley Zhu, Programme Director at IGD Singapore. The forecast could only mean good things ahead for Amazon as its 2% share is poised to pick up provided it makes the best of the prime e-commerce conditions in the lion city, weather the downturn and wait for Singaporeans to come around.