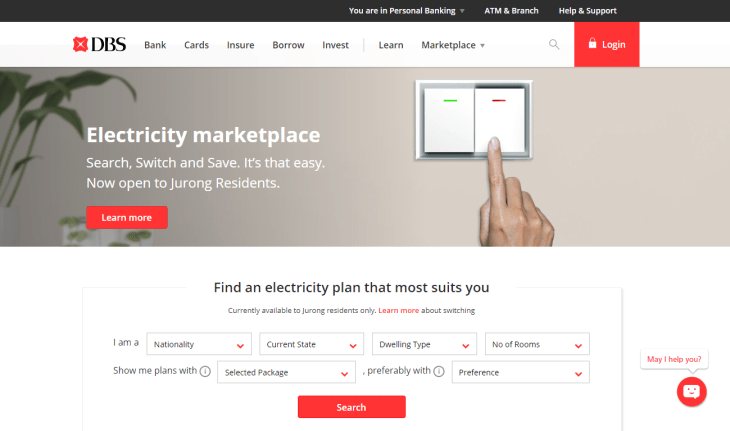 This will enable 108,000 households to apply for energy plans directly in the platform.

According to an announcement, DBS is currently working with two electricity retailers – iSwitch and Keppel Electric. “During the pilot phase, all households in Jurong can search for various price plans that best suit their electricity needs on the DBS Electricity Marketplace. For DBS/POSB customers, they can apply directly with just a few simple clicks via DBS/POSB digibank and choose their preferred payment options. Once the switch is done, customers can look forward to their selected electricity plans provided by their new electricity retailer, without any service disruption,” the bank said.

Jeremy Soo, DBS head of consumer banking group (Singapore), said, “Through our partnerships with alternative electricity retailers, we want to enable our customers to enjoy savings on their bills easily. Our insights also indicate that consumers want a fuss-free process to sign up for other electricity retailers, and we have made it easier and convenient for them to make the switch with just a few simple clicks on DBS/POSB digibank.”

Since 2001, the Energy Market Authority (EMA) has been liberalising the electricity market in Singapore in phases and the pilot phase for residents in Jurong will start from April 2018. DBS is also working with other electricity retailers which will be made available to consumers at a later date.

More companies that are either focused on or are interested in electricity are entering the Open Electricity Market. A collaboration between StarHub and solar energy firm Sunseap will offer two energy subscription plans to consumers. Another player, Senoko Energy previously said it had launched its retail brand for households and small and medium enterprises (SMEs), giving them access to energy packages tailored to their needs when the market opens up later this month.