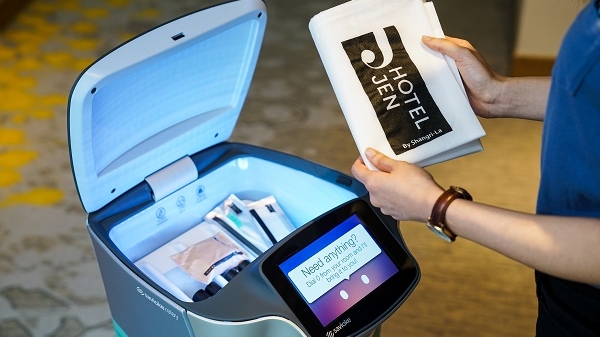 Hotel Rankings: ‘Smart hotels' are on the rise

The industry is shifting to a man-power lean model: less humans, more bots.

The iconic Marina Bay Sands Hotel retained the top spot on this year’s Singapore Business Review’s Hospitality Industry Survey with the number of rooms at 2,561. The world-renowned hotel complex also had a stellar performance in its meetings, incentives, conventions, and exhibitions front, having exceeded their target of 3,000 event per year with more than 3,500 events hosted at the Sands Expo and Convention Centre in 2017, and collectively drawing over 1.4 million delegates to Marina Bay Sands.

“2018 already looks to be a promising year ahead,” said Ian Wilson, senior vice president of non-gaming operations at industry-leading Marina Bay Sands. “Guided by our ongoing strategy to evolve our offerings and enhance guest experiences, Marina Bay Sands is well-positioned to attract and welcome the growing number of tourists that Singapore expects to draw in the years to come.”

Total number of rooms in the hotel segment of Singapore’s hospitality industry, meanwhile, slightly grew by 0.1% to 30,604 rooms in 2017 from 30,572 rooms in 2016. This accounts for the completion of some hotels that concluded their renovation operations over the last 12 months.

Rounding out the top 5 of the list are Hotel Boss with 1,500 rooms; Swissôtel The Stamford at 1,261 rooms; Mandarin Orchard Singapore with 1,077 rooms; and Carlton Hotel Singapore with 940 rooms. Positions of the top five hotels in the list remained unchanged from their 2016 rankings.

Wilson, however, noted that whilst the industry is looking at a brighter 2018, with the next 12 months riding on the momentum of the strong tourism performance over the last quarters, evolution and innovation—in all aspects—is needed for the industry to cope up with client demands and global trends.

Robo-butlers at your service
“As the hospitality industry moves toward a manpower-lean model, we are witnessing a rise in the number of ‘smart hotels’ in Singapore,” Wilson explained. “In this sector, technology primarily serves as a tool to enhance productivity, improve resource allocation, and replace low value tasks, but never to replace the human touch.”

Some of the innovations currently in place in the region include robots or kiosks allowing for automated check in the case of Japan or artificial intelligence apps and tools to handle the customer service and room service offerings of hotels such as ordering of food or other services like massage or housekeeping. In late 2017, Hotel Jen Tanglin Singapore introduced Jeno and Jena, robo-butlers who can do deliveries, ride lifts, and enter hotel rooms. M Social Singapore offers robot butler service and its AUSCA restaurant has a robot chef that cooks perfect eggs. Meanwhile, Park Avenue Rochester Hotel has a robot bellhop and housekeeper duo. Yotel Singapore and Sofitel Singapore City Centre were also reported to be fielding interactive robots with delivery and butler functions in the near future.

For Marina Bay Sands, the technological revolution is happening both in external operations as well as behind-the-scenes to improve productivity and efficiency. Some of these initiatives include a housekeeping technology system, called Optii Keeper implemented in June 2013, allowing room attendants to obtain real-time information on room statuses at a glance through a handheld service.

The drive for innovation is not just fuelled by the enthusiasm of the private sector, however, with the government, led by the Singapore Tourism Board, also doing its part. The Singapore Tourism Board announced on November 2017 partnerships with different hotels and solution providers in the city-state to accelerate the adoption of robotics in the hotel and hospitality industry. Some of the early examples included GTRIIP Global’s check-in, room access, and in-room control mobile app platform; a laundry and linen inventory and delivery service powered by Laundry Network in collaboration with Republic Polytechnic and StarHub; as well as robotic food preparation by Kurve.

With the rise of coworking spaces in Singapore, several new concepts are popping up like Tribe Theory, which fused the idea of coworking spaces, with the ambiance of a hostel, and the openness of an incubator of entrepreneurial ideas. Charging about $26 a night, capsule beds in Tribe Theory’s flagship hotel in Singapore provide the communal atmosphere of a hostel with the standards of a hotel and the entrepreneurial environment of a coworking space, compared to the $100 or more a night for the traditional five-star hotels in the city-state. Plus, clients can pay in cryptocurrency like bitcoin and Ethereum.

Rosy outlook
Singapore hotel owners can breathe a sigh of relief and look forward to the next 12 months with optimism and a promise of a resurgence as the city-state’s brightening tourism outlook and increased infrastructure drive look set to rejuvenate the sector. For instance, comprehensive data from the Singapore Tourism Board estimates that actual international tourist arrivals in the Lion City reached over 17.4 million for 2017, a 6.2% increase from the previous year. Tourism receipts—expenditure or money spent by international inbound visitors including their payments to national carriers for international transport—in Singapore, meanwhile, grew 5% to reach $20.3b from January to September last year.

This was amidst concern in early 2017 of analysts and industry observers that Singapore’s tourism and hotel industry may face a dip in performance. Whilst Singapore has remained as one of Southeast Asia’s top tourist draws and one of the top spots around the world for meetings, seminars, and conferences, experts suggest that the local industry will have to innovate and evolve in order to retain its charm in the hospitality business, with competition all over the Asia and Pacific region also rapidly heating up.

A report by Savills Singapore shared that this dampening of spirits by some hotel owners early last year were caused primarily by the city-state’s declining revenue per available room (RevPAR)—a performance metric used in the hotel industry that shows how well a hospitality establishment is filling its rooms and the rate it charges the customers—from its peak of $224.85 in April 2012 to $199.73 in 2017, representing a decline of about 11% in just five years. This consistent and drawn out decline year after year has caused commensurate pain for hotel owners and institutional investors who have shareholders to answer to each quarter.

However, actual performance for 2017 has some of the early concerns of hoteliers and hospitality business owners taken off their shoulders. Wilson said that Singapore’s charm as a tourist and relaxation destination has remained intact over the past year.

“Singapore’s tourism sector charted a strong performance in 2017, by attaining record highs in tourism receipts and visitor arrivals for the second consecutive year,” he said, noting the need for industry players like his employers to continue being committed in driving quality tourism growth for the city-state. For instance, Marina Bay Sands’ average hotel occupancy rate remained high at 95.6% throughout last year, with majority of overseas guests visiting from Japan, China, Indonesia, South Korea, and Australia.

According to the Singapore Tourism Board, the healthy growth of tourist arrivals last year—which translates well to the local hospitality industry—was mainly on the back of higher expenditure across most major components including Shopping, Accommodation, Sightseeing, and Entertainment & Gaming, amongst others. Gazetted hotel room revenue was estimated at $2.8b for the first three quarters of 2017, a 3.3% year-on-year increase, whilst average occupancy rate increased by 1.4 percentage points to 85%.

Cause of optimism
Savills Singapore noted several factors that will continue to give the tourism and hospitality industry players a cause of optimism for the rest of the year. According the report, “Approximately, a quarter of all international arrivals are for business purposes which is why the health of the economy has a significant impact on hotel performance, especially for those properties that are located in close proximity to the commercial centres.”

This is something that industry players like Marina Bay Sands would like to leverage on for the rest of the year. “To cater to the growing number of business and leisure visitors, Marina Bay Sands is focused on reinvesting and refreshing our programming to encourage new and repeat visitation,” explained Wilson. “One of the milestones we had in 2017 was the completion of a three-year long hotel refurbishment for our 2,561-room hotel.”

There is also the growing market of international tourists within Singapore’s native Southeast Asian region, with the city-state poised to become one of the region’s premier transport and connectivity hubs with its advanced infrastructure like the world-famous Changi Airport.

To paint a picture, international tourist arrivals in the Asia and Pacific region grew by 9% to 308 million arrivals, accounting for 25% of global arrivals—and this is expected to grow more as Southeast Asia’s consumer base become increasingly middle-income and offerings of cheaper flights by the fiercely competitive Southeast Asian airline industry continues.