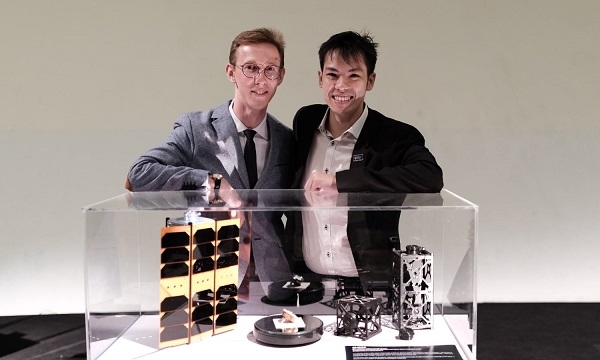 Banking on the broadening spacetech industry worldwide, spacetech startup Aliena is manufacturing cost-effective technologies that enable satellites to manoeuvre smoothly in space whilst bearing in mind the various constraints, including limited power for the satellites and the real-estate set aside for propulsion systems.

Aliena is also taking advantage of the growing accessibility of satellites to companies and commercial entities as a means to acquire and transmit data for terrestrial-based applications, where one of the main interests is in deployment of smaller commercial satellites in space at lower altitudes.

The startup’s systems give satellites longer lifetimes, compared to conventional thrusters that are prone to failure after extended periods of operation. Lim explained that satellites are usually short-lived as the effects of the atmospheric drag are not compensated for.

Lim shared that his startup is a spin-off company from Nanyang Technological University, supported by NTUitive, whose members hold appointments with the university's adjunct faculty and work closely with researchers and engineers from the Satellite Research Centre.

“The business was started in August 2018 when the founders assessed that there was a real market need for advanced propulsion systems that could allow for the company to address operational requirements that would empower and enable businesses to thrive,” Lim said.

“In general, it’s difficult to raise funds as a ‘space startup’—generally because the runway before revenue generation kicks in may be long, and the high capital investment required for space qualification facilities also adds to the risk that investment entities have to take during early-stage investment,” Lim said.

Aliena plans to use the funds to commission a private jet propulsion test facility and satellite integration/assembly centre in Changi. The company will also launch a 3U nanosatellite platform in space for the first in-orbit demonstration, in partnership with Singapore-based space tech firm NuSpace.

“Aliena is already hard at work with setting up their jet propulsion test facility. This will in turn set them up nicely for a successful in-orbit demonstration. Thereafter, with proven space heritage, they would make a compelling case for all commercial small satellites to re-think propulsion, and be ready to take the space propulsion sector by storm,” said Daniel Tan, head of investment at Cap Vista.