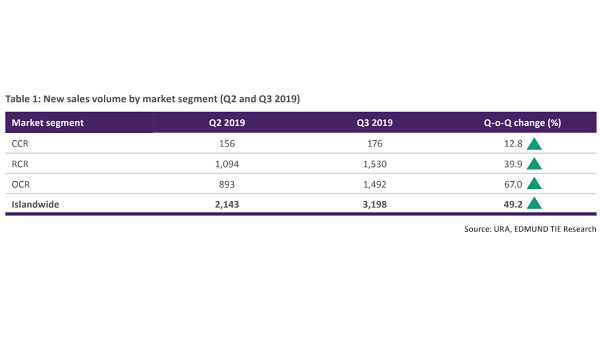 All regions recorded growth in new sales, with the largest surge being seen in OCR.

The volume of new condo sales surged 49.2% QoQ or 16.9 YoY to 3,198 units from the 2,736 units in Q3 2018. The figure broke the record last year, when a buying frenzy occurred the night before the implementation of the cooling measures last 6 July 2018, according to an Edmund Tie report.

All three regions recorded growth in new sales, with the largest growth being seen in Outside Central Region (OCR), due to projects being priced attractively, hence drawing buyers into the market with the large variety of options. The quarterly figure showed growth despite a decline in the number of new project launches. It was lifted by a rise in the number of units released for sale, with the launch of major projects in Q3.

Edmund Tie added that this also led to a growth in sell-down rates of these new launches, as buyers are provided with more options, although there was the Hungry Ghost Month in August.

“The injection of ample supply last quarter, amounting to some 6,900 units islandwide, provided home seekers with abundant options and in tandem with competitive pricing, outstanding design and good locational attributes, catalysed a substantial volume of conversion. Demand was project specific and uneven across the market. The surge in demand was mainly attributed to projects such as Parc Clematis, Piermont Grand, Avenue South Residence, Treasure at Tampines, One Pearl Bank and The Florence Residences,” said Ong Choon Fah, CEO at Edmund Tie.

On a regional basis, OCR saw the largest new condo sales growth as it jumped 67% QoQ to 1,492 units from 893 units from the previous quarter. Despite having only two projects launched in Q3, the number of units released for sale was still 43.4% QoQ higher than
that in Q2. Additionally, average sell-down rate also improved by 7.3 ppt on a QoQ basis.

This was driven by the sales of Parc Clematis, which achieved a sell-down rate of 29.6% against the total of 1,468 units at the development. When compared to the 665 units released for sale at the project, the take-up rate was significantly higher at 65.3%, Edmund Tie noted.

Meanwhile, Rest of Central Region (RCR) contributed the most amount to the overall new condo sales volume. It rose 39.9% QoQ to 1,530 units from 1,094 units, leading to a sell-down rate of 26.6% as there were more options in this market segment and the strategic location of being location in the city fringe was favoured by buyers.

The number of units released for sale in the region rose further in Q3, growing by 75% QoQ. Its sell-down rates of new launches ranged from 6.8% to 33.6%, with One Pearl Bank and Avenue South Residence attaining sell-down rates exceeding 25%. These two projects comprised of 774 and 1,074 units, respectively, and is said to be considered well taken-up amidst the numerous new launches in recent quarters.