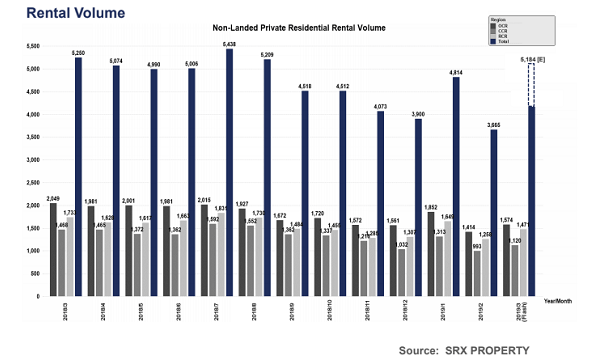 According to OrangeTee & Tie’s head of research and consultancy Christine Sun, the increase in rental volume could be attributed to a rise in transactions following a seasonal dip as the Chinese New Year period in February is a traditional lull for most property transactions.

“Looking at past data trends, March was one of the busiest months for leasing activities, as it recorded the second/ third highest monthly leasing transactions of the year for 2016 to 2018. Leasing activities usually pick up from March onward, which often marks the beginning of the most active leasing season that may last until the August-September period,” she explained.

A pick-up in rental demand from expats working in the service and hospitality industries was also observed in March. “The upcoming expansion plans for Singapore's two integrated resorts, Marina Bay Sands and Resorts World Sentosa, may further boost rental demand from these sectors,” she noted.

According to the SRX Property Price Index for HDB Rentals, YoY, overall HDB rents increased by 0.5%, although rents were down 15.1% from the peak in August 2013.