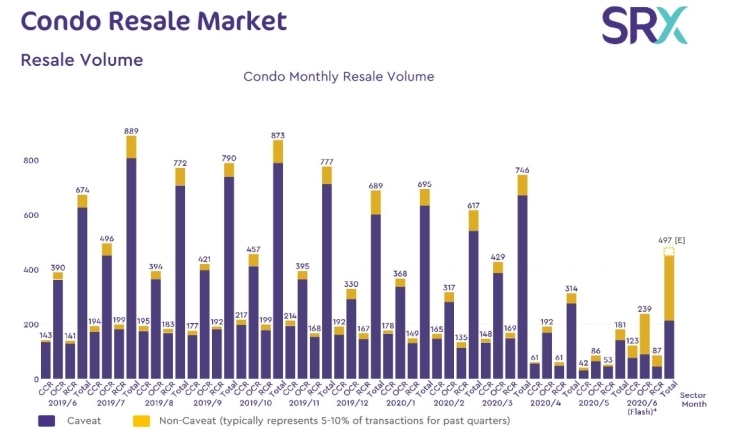 Condo resale prices down 0.6% in June

But 178.6% more units were sold during the month compared to May.

Resale prices of private non-landed condominium and apartment units fell 0.6% YoY in June compared to a year earlier, according to a report by SRX.

This is despite more units being moved in June compared to May. An estimated 487 units were resold during the month, a 174.6% increase from the 181 units sold in May.

The higher volume of sales was expected given the transition to Phase 2 of circuit breaker measures last month, according to Christine Sun, head of consultancy and research at OrangeTee & Tie.

The highest transacted price for a resale unit in June was the $12.2m apartment at Skyline @ Orchard Boulevard. In RCR, a Floridian unit was resold for $3.9m, whilst a unit at the Tembusu took the cake in OCR, having been resold for $4.6m.

Sun noted that the private resale market quickly picked up in sales last month compared to May thanks to the use of technological tools.

“Whilst many buyers, especially owner-occupiers, would still prefer to make a final inspection of the physical premises before confirming the purchase, some could make a faster decision once house viewings resume after the circuit breaker period ended. Virtual house tours and e-open houses have helped to speed up the buying process for some buyers as they could select and shortlist units remotely prior to the resumption of house viewings,” said Sun.

Sun also observed that more buyers and sellers are willing to negotiate prices due to the lower sales volumes in the past few months, shaving price gap expectations.

“This may also explain why more deals were closed in recent weeks as both parties were willing to lower their price expectations,” she said.

The private resale market is expected to continue improving, barring no second wave of COVID-19 infections and assuming that the economy does not deteriorate drastically, concluded Sun.