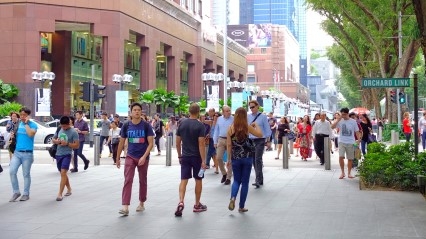 Unmanned stores are deemed safer due to contactless protocols.

Around 49% of Singaporean consumer respondents said that they are more likely to visit unmanned stores or physical stores with few to no staff, indicating that these stores are safer to visit due to social distancing and contactless protocols, according to a report.

The report, commissioned by network video solutions Axis Communications and surveyed by Milieu Insights, found that consumers in Singapore were less likely inclined to visit or shop at physical stores, including high-end restaurants, pharmacies, and grocery stores, post-pandemic.

It found that their intention to shop at physical stores dropped by 10% compared to the pre-pandemic era.

“Evolving consumer preferences towards health and safety have elevated the growth potential of contactless services. As retailers pivot to meet consumer needs, we foresee an increased rollout of unmanned stores across Singapore in line with its Smart Nation aspirations,” said Carl Malmqvist, regional director for South Asia Pacific at Axis Communications.

These stores, whether fully or partially unmanned, rely on technologies and automation such as artificial intelligence, QR Code authentication, and intelligent video cameras for their operations and support key functions such as self-checkout, movement tracking, and security in delivering memorable experiences, he added.

Convenience was the top priority for consumers, with around four in five viewing self-checkouts as a key feature for unmanned stores, with longer opening hours and faster checkouts as amongst the top perceived benefits, according to the study.

It also found that 61% of the respondents prefer having service assistants in case of emergencies. The respondents also identified safety/security as a crucial element for unmanned stores, citing automated entry/exit by QR codes (66%) and video surveillance to prevent crimes and manage customer experience were deemed as essential features for unmanned stores.

The respondents were also more receptive to unmanned experiences in specific types of stores such as convenience stores, supermarkets, and grocery stores.

The survey involved a total of 1,000 consumers in Singapore.