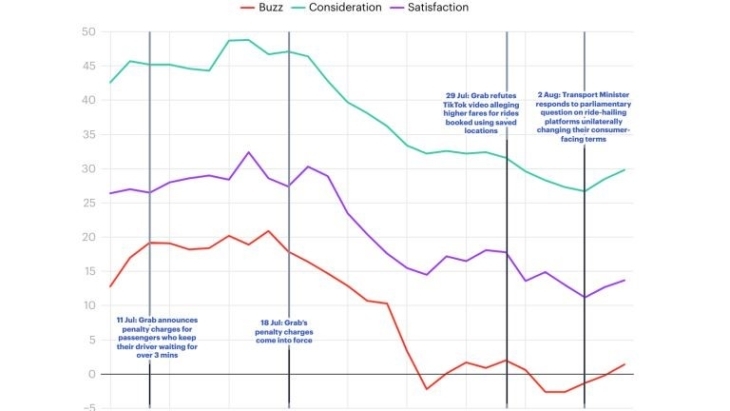 This chart from YouGov shows consumer perception of Grab after it announced that it will cut down the grace period for a driver’s waiting time to three minutes.

The Buzz score, which measures whether consumers heard positive or negative things about a brand for the past two weeks, showed Grab’s score to fall from 17.9 in 18 July to -2.6 in 1 August.

Consideration score for Grab, which tracks the percentage of Singapore residents who would consider using the platform in the next month, lost 20 points. It dropped from 47.1 to 27.3 in the same time frame. Customer satisfaction score for Grab also dropped 14 points from 27.4 to 13.

Last 11 July, Grab announced penalty charges for passengers who will keep their drivers waiting for over three minutes. In a response to a parliamentary question, the Minister of Transport said that Grab has complied with the government’s requirement to give commuters at least seven days noticed for any changes in their schemes and fees and that all “setting of (ride-hailing) fares” are commercial decisions made by ride-hailing operators which the government does not intervene in.

Focus on adopting other cleaner vehicle models not only EVs: analyst