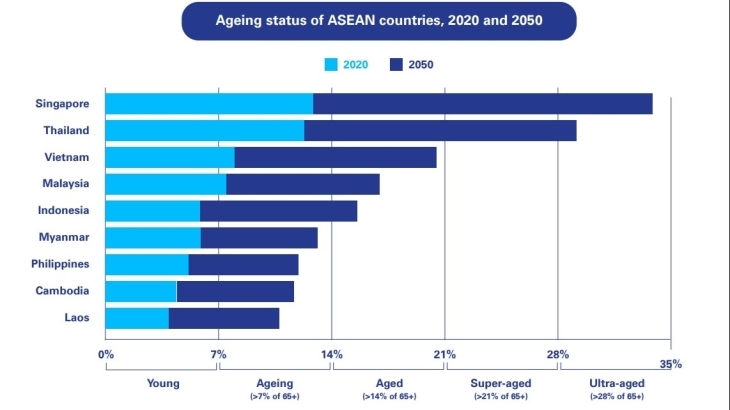 Chart of the Day: Singapore's elderly population to increase to 40.1% in 2050

The proportion of people aged 65 or older in the ASEAN region is above 7%.

All ASEAN countries are projected to become aged societies, or countries with an elderly population making up more than 20% of its total population, by 2050.

Southeast Asian states have been classified as “ageing countries” as the proportion of people aged over 65 is above 7%.

In the report "The Decade of Healthy Ageing in ASEAN: Role of Life-Course Immunisation," it was projected that the number of people, aged 65 or older, will reach 1.5 billion in 2050, globally.

Most of the increase in population is expected to arise from developing countries including member states of ASEAN.

“The rate of ageing varies across ASEAN countries, with Singapore, Thailand, Vietnam and Malaysia ageing faster,” the report read.

“They are officially classified as ageing countries, where the proportion of people aged over 65 is above 7%.”

The report estimated that the proportion of people aged over 65 is around 12.4% in both Singapore and Thailand and 7.6% in Vietnam. The Philippines and Indonesia, meanwhile, have less than 7%.