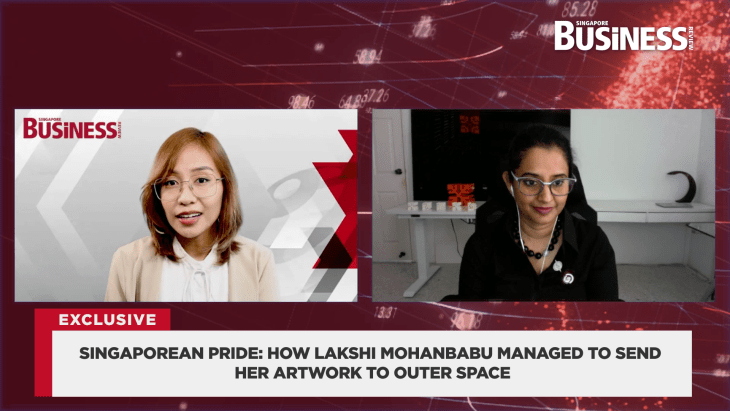 To infinity and beyond: How this Singaporean artist created art that could last in space

The art pieces are called ‘Structure & Reflectance’ and ‘The Cube of Interaction’.

The biggest hurdle for Lakshmi Mohanbabu, when she created the two art installations for Moon Gallery Foundation, is how it could withstand the harsh environment of space. Because true to its name, the Moon Gallery, will be an art gallery that will be located on the moon.

For a little background, the Moon Gallery is an international collaborative artwork and a gallery of ideas worth sending to the moon. Its aim is to be the first permanent museum on the moon, containing 100 works of art from around the world, compacted to a 10 x 10 x 1cm plate. The gallery is expected to land on the moon in 2025. Lakshmi was one of the thousand artists that answered the call for art pieces, in which she was selected.

Currently, it contains 64 art pieces—two of which are by Lakshmi, in collaboration with Nanyang Technological University, Singapore (NTU) and the National Additive Manufacturing Innovation Cluster (NAMIC).

“The main challenge was that it was going to be something that was very tiny, it had to be less than a centimetre cubed. It also has to last the test of space as well as the harsh conditions on the moon,” Lakshmi explained in an exclusive interview with Singapore Business Review.

The first cube was called ‘The Cube of Interaction’, a prototype in collaboration with Associate Professor Daniel New from the Singapore Centre for 3D Printing at NTU. It was an orange cube designed to look like a blossoming flower, with arrows and waves for tips supposedly to create a “negative and positive space which defines each other,” Lakshmi said.

The second cube was called ‘Structure and Reflectance’ and was created in partnership with NTU Associate Professor Matteo Seita. It features four unique faces made by changing the crystal orientation of the stainless steel during its 3D-printing process, a proprietary technique developed by professor Seita and his team.

“It's something that connects all of humanity and it's got ideas in it that have existential principles within,” she added.

Currently, Lakshmi is working on a series of non-fungible tokens (NFTs) for a cross-chain marketplace for fractionalised and serialised NFTs on Solana. She is designing them based on her works for the Moon Gallery.

Lakshmi’s inspirations for her art centred on perceptions bias.

“That's been the theme for most of my artworks from the interaction series to the expression series. So in creating this, I used that as the main idea, and I derived the cubes from existing painting ideas,” Lakshmi said.