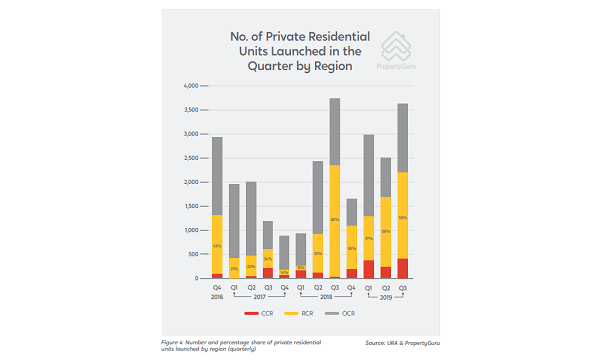 The rest of Central Region could be 2020's property hotspot

New launches in this region accounted for 47.5% of all new launches – despite it only occupying 15% of Singapore’s land area.

As the new year nearly approaches, properties within the rest of the central region (RCR) are expected to take the spotlight in the country’s property market, according to a forecast by PropertyGuru. New launches in this region, which in the past four quarters, accounted for roughly half (47.5%) of all new launches – despite it only occupying 15% of Singapore’s land area.

The rise of upcoming developments and the revamp of amenities in previously-built properties are seen to create room for the property value to expand in RCR.

Ageing precincts like Beauty World and Rochor are being adapted to modern modes of living with refreshed amenities that facilitate work and play. Such rejuvenation is to create a ripple effect that would encourage developers to join the revamp bandwagon, and similarly motivate buyers to consider properties in the urban area, noted the report.

PropertyGuru’s Tee Khoon says, “In the coming year and decade, we foresee the positioning of RCR projects to change as upscale developments spill over from the Core Central Region (CCR) and its prime districts to the RCR.”

Although RCR may take a backseat ahead of 2020 to Core Central Region (CCR) with regards to the count of new projects, PropertyGuru foresees uptake for existing uncompleted RCR projects, such as Parc Esta and Jadescape, to continue at 2019 rates.

With RCR’s foray as an option for upscale housing, the region remains an attractive location for property buyers with various demands including those that are budget-conscious.

A confluence of demand from various buyer groups are expected to boost sales of RCR properties, such as foreigners looking for a good buy, owner-occupiers who want to live closer to the city, and Singaporean investors, said the report.

RCR will be appealing to property investors seeking rental yield, as RCR has been showing good performance, outperforming regions since 2014, according to the URA Rental Index for non-landed properties.

Meanwhile, Outside Central Region (OCR) is also showing great promise with its infrastructural developments and improved amenities over the past decade bringing staggering upsides to homes in the region. Comparing Q3 2019 to Q1 2010, the OCR has seen an 84% increase in median psf transaction prices for private homes, beating RCR and CCR growth in percentage terms.

CCR is expected to hold onto its prestige appeal. With no less than eight projects to be launched in the (CCR) in 2020, the performance of such projects will be a litmus test of consumer demand at the higher end of the price range. Quarterly figures in the past decade show that foreign buyers, including permanent residents, typically account for 30% to 35% of all property purchases in the CCR.

Buying trends ahead
A buoyant buying trend into the property market is expected in the year ahead, noted the report.

PropertyGuru also sees new mature estate flats as unlikely to dent resale demand. The Housing and Development Board (HDB) has already revealed it will build around 5,000 BTO flats in the city-fringe location of Queenstown by 2027 and another 1,500 units in Bishan, an estate located within the RCR, by 2025.

Due to the contradiction between buyers’ wages and loan-to-value (LTV) ratio, an affordability gap is expected to take place within the property market. The number of housing loans, which rose in the past two quarters, is in line with the increase in transaction activity, whilst buyers’ financial leverage remains lower than the period before last year’s cooling measures kicked in, read the report.