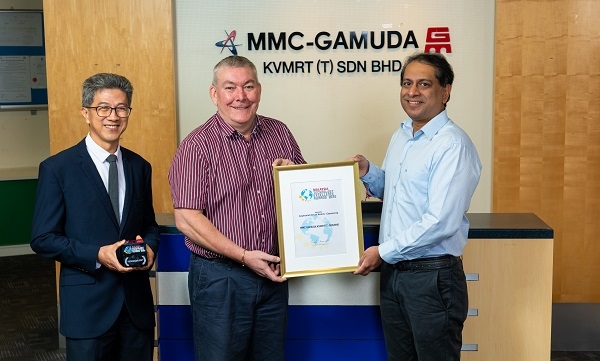 Now in its second year, the MTEA event honours enterprises that take risks and which lead the charge in developing groundbreaking projects, digital services, reimagined strategies, and technological initiatives. Winners were judged on the basis of uniqueness and innovation, effectiveness and impact, as well as dynamism.

With a sterling track record in managing large-scale projects driven by engineering innovation, MGKT is the appointed Underground Works Package contractor for the Klang Valley Mass Rapid Transit (KVMRT) Putrajaya Line covering 13.5km of underground tunnels with eleven underground stations. This follows the successful completion of the 9.5km underground portion of the MRT Kajang Line which was launched in July 2017.

Through the successful adoption of AR technology to manage construction progress from pre-construction to post construction, MGKT has solidified their position as one of the pioneers in AR engineering with the creation of the BIMAR app. The solution was developed in-house using Unity and Apple software development kits—and is also the first such attempt by a Malaysian contractor.

The drive behind the initiative was to create a tool for efficient real-time onsite construction validation and planning resulting in greater project efficiency, whilst avoiding discrepancies, which can compound over time and require costly repairs as well as delays.

In September 2019, Unity released the AR Foundation Kit (SDK), enabling AR apps to be built quickly on iPads. Having spent the last 2 years prototyping and assessing other technologies, such as software development kits (SDK), application programming interface (API), and hardware including 3D holographic glasses, MGKT saw the immense potential in the utility of the kit and jumped on board to use it as a base for their AR app solution.

By the end of September 2019, BIMAR was born, enabling the use of Apple iPads to conduct 3D walkthroughs at job sites.

BIMAR is an AR application that allows real-world visualisation of 3D building designs via a mobile device during site inspections. As the user hovers his device over a specified location, the screen projects a virtual 3D overlay of design and construction elements, graphically distinguished by work disciplines.

Captured in real time, this method instantly allows the company to spot clashes or errors, thus circumventing reworks and facilitating necessary field modification in a timely manner. This AR solution offers insight and precision unlike any other conventional methods of relying on photos, drawings, laser scan point clouds, and hardcopy documents for construction validation.

The solution was also customised to enable rapid, large-scale roll out across a mega infrastructure project and further enhanced with various other digital and cloud-enabled functions.

MGKT notes that the fast-tracked development was only possible with the digital infrastructure that was already painstakingly established in the preceding years leading up to the creation of BIMAR. Without accurate Building Information Modelling (BIM) renderings, or a reliable Cloud system, the app wouldn’t be half as powerful.

Thanks to their in-house development team however, their efforts culminated in the BIMAR app which has radically enhanced the quality and safety aspects of their overall operations with its interactive and tangible means of visualisation.

The Malaysia Technology Excellence Awards, presented by Singapore Business Review, was held via video conferencing throughout the month of September.

If you would like to join the 2021 awards and be acclaimed for your company’s exceptional technological innovations, please email Julie Anne Nuñez at julie@charltonmediamail.com.