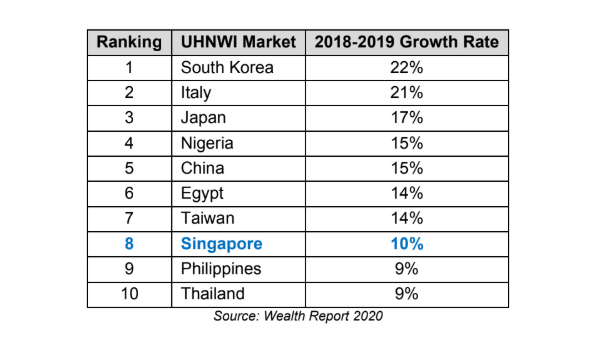 New ultra-rich individuals are emerging from its vibrant startup scene.

Singapore ranked as the eighth fastest growing ultra-high-net-worth individuals (UHNWIs) market in the world, at a 10% growth rate from 2018 to 2019, according to Knight Frank’s City Wealth Index report. UHNWIs are those whose net worth is $41.59m (US$30m) or above.

The report attributed this growth to Singapore's liveability, as UHNWIs set up base in the country for business. The Lion City also has a strong potential for investment.

Knight Frank added that Singapore ranked 5th globally when considering lifestyle factors and 10th when it came to investments. Notwithstanding, the vibrant start-up scene locally has also given rise to a new wave of UHNWIs.

Meanwhile, the total UHNWI population in Asia rose 13% with 11,800 UHNWIs, bringing the total population in the region to 103,000 individuals. North America, where the largest proportion of the world's wealthiest population reside, registered a 6% increase in UHNWIs last year, whilst Europe saw its position lag at 4%.

In addition, 71% of Singaporean UHNWIs’ wealth managers stated that their wealth also increased in 2019 but only 53% are expecting to have more money in 2020.

Knight Frank revealed that about one in four Singaporean UHNWIs will buy a new home in 2020, outstripping the global average of about one in five. The main drivers for purchases are to upgrade their main residence, for their children’s education, or for business purposes. The most popular locations, other than Singapore, are the UK, Australia and US, wealth managers say.