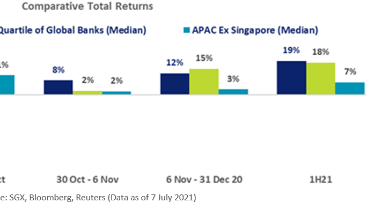 Chart of the Day: Bank stocks amongst strongest in H1 as locals average 19% of returns

This chart from SGX shows that bank stocks were amongst the strongest industries of the global stock market in the first half (H1) of 2021, with local banks DBS, OCBC, and UOB averaging 19% of the total returns over the six months, in-line with the largest global banks by market value.

Whilst DBS, OCBC, and UOB received net institutional and net proprietary inflows of $1.39b in the first quarter (Q1) and $468m in the second quarter, endemic developments, varying outlooks for growth, inflation and monetary policy saw a frequent rotation of net inflows to net outflows, and vice-versa in H1.

The three banks have consistently reported more than $5b in combined quarterly net interest income for the past three years, SGX noted. For its Q1, fiscal year 2021 report, DBS’ quarterly net profit crossed the $2b mark for the first time, maintained by the bank to be underpinned by strong business momentum and stabilising asset quality.

OCBC noted in its Q1 FY2021 report that it saw robust results, supported by the strength and resilience of its banking, wealth management and insurance franchise, whilst UOB highlighted in its financial report a solid rebound in results on the back of broad-based growth across its diversified franchise.