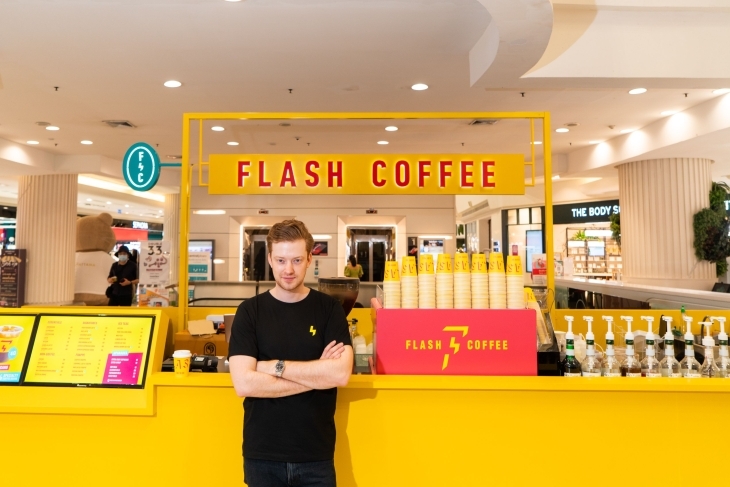 Singapore-based Flash Coffee’s has an ambition to create a more affordable coffee break.

A lot of professionals cannot function without their early morning coffee, often enjoying one with breakfast or grabbing one on the way to work. That's not surprising here in Singapore, as according to Statista, around 800 million cups of coffee were sold in this market in 2020.

This was part of the reason that David Brunier, CEO and co-founder of Singapore-based tech-enabled coffee chain Flash Coffee started the company.

In an exclusive interview with Singapore Business Review, David said that in 2019, Rocket Internet’s Oliver Samwer and Alexander Kudlich reached out to him and asked whether he would be open to founding a new company with them.

“Around that time, Luckin Coffee did their breath-taking $4B IPO after operating for 18 months, which got me excited and made me take a deeper look into the coffee industry,” David told SBR.

He said that he found the fully un-digitized industry that was serving average quality coffee at exorbitant prices, largely unaffordable to the mass markets. He knew then that there was a tremendous potential to create a fully re-imagined product customer experience.

“Sebastian and I clicked the minute we met – we shared our love of coffee, had a very similar idea of how we envisioned building Flash Coffee and connected on a personal level very quickly. Being able to add his entrepreneurial mindset paired with his process-driven and analytical skill set into the equation, we formed a strong partnership instantly and became co-founders,” David recalled.

Launched in January 2020, Flash Coffee aims to revamp the company’s staffing models to enable Flash Coffee outlets to have significantly higher output with less staff than comparable businesses. They created a concept that eliminates traditional business models' inefficiencies, instead choosing to invest in the product itself. The startup plans to target tech-savvy, young professionals.

Flash Coffee is a tech-enabled coffee chain that serves an award-winning menu of high-quality drinks at affordable prices. Customers can use the Flash Coffee app to order and pay online, choosing to pick up orders from one of the brand’s iconic yellow storefronts or order for delivery through major platforms in each market.

“We see Flash Coffee as a tech company at its core: We use our consumer app to bring convenience to our customers with our pickup/delivery offer and to acquire and retain users via features such as a refined loyalty programme, subscription, coffee wallet, gifting and more,” David said.

Flash Coffee currently has 50 coffee shops across Singapore, Thailand, and Indonesia which continues to be profitable.

Recently, the company raised $20.07m (US$15m) in a Series A funding round led by White Star Capital, with participation from Delivery Hero-backed DX Ventures, Global Founders Capital, and Conny & Co. The company plans to use the funding to launch 300 outlets across 10 markets in Asia Pacific.

David did not disclosed which countries they are eyeing to launch but he said that they have chosen these new markets for their great combination of population size, population density, higher-than-average coffee consumption per capita, rapidly rising average income and a more significant percentage of residents within our target group, namely young and tech-savvy office workers.

“Currently, Flash Coffee is opening three new outlets per week regionally, an already ambitious pace that will be tripled to 10 launches per week in order to open and operate 300 additional stores across the region by the end of this year. Flash Coffee will also build a regional HQ in Singapore and expand its regional tech hub in Jakarta to 50 people,” David said.

David said their vision is to democratize high-quality coffee and make it accessible to Asia’s rising middle class.

“To reach this ambitious goal, we plan but don’t limit ourselves to having a Flash Coffee outlet every 500 metres in every major Asian city. We also plan to build a tech-driven powerhouse to build new brands across the region, top-of-class operational processes and a fully integrated value chain including in- house production facilities to further drive backward integrations,” he added.