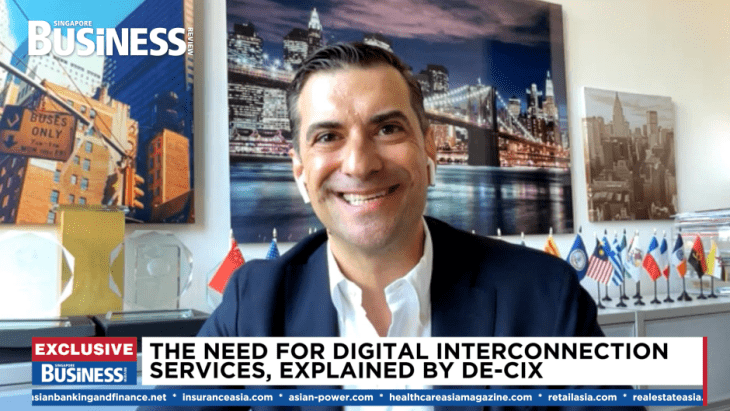 Why internet exchange is the airport of network operators

The platform enables a direct connection between networks, allowing faster exchange of data.

When fans watch live streams of their favourite foreign artists, they do not really get to watch them "real-time" given the delay of data transfer from where they live is being hosted to where it is being watched. The same delay is experienced by businesses that exchange data with their suppliers and buyers across different borders.

These lags, however, can be minimised if owners of streaming platforms connect to an internet exchange.

An internet exchange is the airport of internet operators, according to DE-CIX CEO Ivo Ivanov.

"Comparing internet operators to airlines, what internet operators do on all platforms, they interconnect between each other, and instead of exchanging packages, luggage and people, they exchange data packets, data traffic," Ivanov told Singapore Business Review.

To further specify, Ivanov said internet exchanges like DE-CIX connect a platform like Netflix and an operator like Singtel directly for faster exchange of data traffic.

“When businesses take advantage of services from different providers and connect these services to people and devices in various locations, the flow of data and content becomes increasingly complex. The only way to excel as businesses become more digital is to have control over the environment where digital transactions happen,” Ivanov explained.

"Internet exchange eliminates by logic the risk that a third party can compromise traffic," he added.

Internet exchanges are also extremely secure since networks connected to the platform can exchange traffic directly, prohibiting any party to attack the flow.

Latency is the new currency

Normally, Ivanov said data passed between two networks which are not connected to an IX is passed via the public internet.

“When data travels via the public Internet, it may take long routes to the next point where, by chance, both networks – or their transit providers – are located in the same data centre and have a direct fibre-optic interconnection,” he explained.

“If, on the other hand, the retailer is directly connected with the customer’s internet service provider, then this entire journey is much shorter and is also shielded against the risks of the open Internet. The data traffic can also be further protected by additional security services provided on the IX,” he added.

The same happens between the retailer and its payment service provider.

If a retailer has integrated payment services from multiple financial services providers, Ivanov suggested that they create their own private connected space on the IX, also known as Closed Used Group, together with their suppliers and logistic partners.

A Closed Used Group allows exchange of data in an exclusive and highly secure environment, well shielded from the public Internet.

“This results in low latency, resilient, and secure data exchange with authenticated partners, and is highly scalable and flexible, so that new partners can be added, and connections can be scaled according to demand,” said Ivanov.

DE-CIX also offers security services like blackholing to protect them from DDoS attacks.

Overall, what an internet exchange does is reduce the cost of data exchange between two networks and at the same time provide lower latency.

Lower latency is achieved through an IX since the platform allows peering, which in turn, reduces the length of path that traffic needs to travel.

Peering is when networks can directly share traffic to one another.

"Latency is important to be able to perform the digital services, to enjoy the digital applications today.  Latency is the new currency, every millisecond counts and therefore we need infrastructure which delivers services where the users are...like data centres and internet exchanges," he said.

“Latency is decisive for the time it takes for a transaction to be registered when one is making online purchases, for getting a smooth reaction and good user experience when using applications that are hosted in the cloud, and more – such aspects support business success in the digital economy,” Ivanov added.

In a bid to "save as many milliseconds as possible," DE-CIX has established internet exchanges in new markets like Africa, the United States, the Middle East, and Southeast Asia.

So far, there are over 2,700 network operators connected to DE-CIX which include streaming platforms like Netflix, Amazon, and Disney.

“Our business and private lives depend so much on digitalisation and digital service quality, that is why I can say that infrastructure services behind this quality and behind this experience have become crucial for our economy,” Ivanov said.

In the next few years, Ivanov said DE-CIX plans to “place as many as possible” internet exchanges around the globe.

“We want to make sure that exchanges are available everywhere, of course in different sizes depending on the market demand,” he said.

Apart from the geographical densification of infrastructure, the other area that DE-CIX is working on is its services.

According to Ivanov, DE-CIX wants to offer different types of interconnection, features, and services for all types of network operators.

“I’m talking about special application interconnection for the gaming industry, but also for healthcare, for finance, for automotive,” he said.

Which mobile operator provides the fastest internet in Singapore?