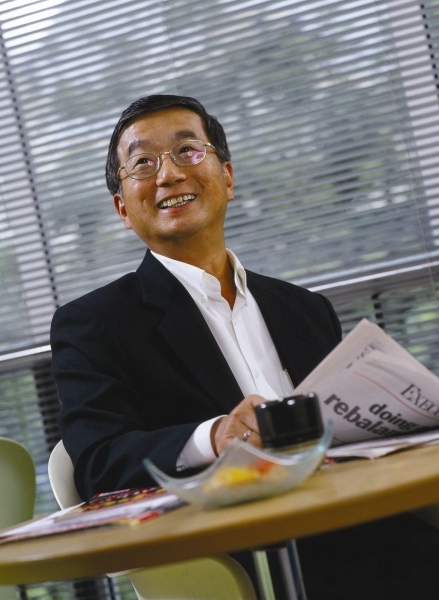 The CEO of Tat Hong Limited speaks about pump priming. BY BRYAN CAMOENS

Could you please explain how currency fluctuation surrounding the Yen could affect the final year profit for Tat Hong?

With regards to realised and unrealised forex losses, the purchase of new cranes from Japan is recorded as inventory based on the exchange rate on the date of transaction, whereas outstanding suppliers’ invoices recorded as liabilities of the Group are being re-valued at the prevailing month end rate each month (unrealised losses), until they are eventually settled at the prevailing rate on due dates (realised losses). The unprecedented 18% appreciation of the Yen in 3QFY2009 has resulted in higher foreign exchange losses (both realised and unrealised). However, the Group expects to remain profitable for FY2009, barring any unforeseen circumstances.

How has the decline in Australia’s construction industry, which incidentally is a key market for you, affected growth?

When it comes to our participation in Australia’s growing resources sector, Projects that have started are still ongoing, so does not affect Tat Hong as requirements for cranes and heavy equipment have been committed;
According to PR NewsWire (January 29, 2009), prospects for the mineral resources market are also enhanced by the potential offered by the oil and gas sector and Australia’s liquefied natural gas (LNG) production is slated to increase to 24 million tonnes per annum by 2011 and quadruple by 2020, from a production of 15 million tonnes per annum in 2007;

Also, the Commonwealth Government’s four-year $42 billion Nation Building and Jobs Plan has allocated about $6.6 billion for housing, including the construction of 20,000 new social housing dwellings and 802 defence houses, as well as $400 million to upgrade and maintain around 2,500 vacant social houses. A further $14.7 billion will go to schools for building libraries, science laboratories and language learning centres as well as maintaining and renewing old school buildings;
In view of the above, we believe that Australia still holds promisingpotential for us.

With regards to Australia’s construction, why the decision to place most of your focus on LNG projects compared to other forms of construction and, if so, how has this benefited the company?

The resources sector is a major contribution to Australia’s GDP, and although a few
new resources projects have been put on hold due to the current financial crisis, many other projects that have started before the crisis began are still ongoing, and Tat Hong is involved in these projects; The typical timeline for a resources project is 10 to 15 years. Thus, by the time the ongoing projects are completed, the economy should have recovered and new projects would have started.

Prior to the firm’s results announcement on February 13, Tat Hong issue a profit warning statement for 3QFY09. Why was this and with regards to the profit announcement, what was it that dragged the Group’s performance down, and by how much?

The net profit registered an 86% decrease for 3QFY2009, due to forex losses (realised and unrealised) of approximately S$23 million from the strengthening Yen against the Singapore and Australian Dollar.

Did the results announcement take in effect the recent Budget 2009 with the government planning to spend up to $20 billion on infrastructure spending, and how Tat Hong will benefit from the gain given that the firm is an already established player in the region?

The Government pump-priming the economy through additional investments into infrastructure developments – expected to boost demand for construction services and equipment.
During economic downturns, equipment users are more likely to seek rental over ownership, Hence this will buoy demand for Tat Hong’s fleet, Tat Hong believes that demand for its cranes and equipment will remain strong.

It was stated that equipment sales will weigh on the group’s earnings, however what was not mentioned was that the group will profit on rental as many firms will prefer to rent equipment during a recession rather than buy, how will this increase the profitability of Tat Hong?

Tat Hong is a “rental” company, gross profit from rental activities now account for 75% of Tat Hong’s total gross profit.
Tat Hong’s forward bookings show the volume and demand that will sustain the profitability at operating level of the Group.
On the equipment side, Tat Hong will reduce inventory by 15% from the current $210 million.

Despite strong support from Singapore how will the company’s diverse exposure in ASEAN and Australia affect the balance sheet this year?

In addition to Singapore, we are also receiving strong support from two other key markets – China and Australia.

In China, key themes in the 10-point plan are investment and construction. There will be more construction of housing, roads, highways, dams, irrigation systems, power grids, water and waste treatment facilities, schools and hospitals, airports etc. These will create demand for construction related heavy industry products;
The Towercrane rental is a new business concept in China, as most preferred to purchase the towercranes in the past. With the economic downturn, more companies will choose to rent the towercranes over purchase to manage costs. In Australia, the four-year $42 billion Nation Building and Jobs Plan, with a focus on construction, and the potential prospects offered by the oil and gas sector, will help to keep cranes and equipment in demand for a while.

With 2008 being an exceptional year for the construction industry, analysts are expecting demand to moderate in 2009. What does Tat Hong expect for the year 2009?

2009 will be a challenging year for everyone.But Tat Hong’s operating numbers and balance sheet remain strong. The demand for Tat Hong’s cranes and equipment should remain strong in 2009 as governments continue to pump-prime their economies through infrastructure spending.